Meter is the division of beats into equal groups. We’ve already talked about this briefly in the How to Read Music course (part 2) but here’s a quick demonstration.

This is a pulse made up of 6 quarter notes:

Although it’s quite simple, it can be played in different ways. Let’s try one possibility where the 6 quarter notes are divided into 2 groups of 3 quarter notes:

Now let’s try a different one. This time the pulse is divided into 3 groups of 2 quarter notes:

I’m sure we can agree that these pulses are very different in their musical effect.

Now the important question is:

How did we distinguish that these two are different at all?

In the first example above, the 6 quarter notes are divided into 2 groups of 3 beats each. The first beat of every group is stronger than the other two; or we can say that it’s accented. And so we perceive the meter as being ‘in three’ meaning that the pulse has an ongoing ‘one, two, three, one, two, three, etc.’ effect. Another term for ‘in three’ is to say that the meter is ‘triple’.

In the second example, the strong beat appeared every 2 beats and so we perceive the meter to be ‘in two’ – its effect is of a recurring ‘one, two, one, two, etc.’, where the ‘one’ is strong (accented) and the ‘two’ is weaker. Another term for ‘in two’ is ‘duple meter’.

These cycles of strong and weak beats are better known in music as meters. They can be in any amount of beats but the most common are the ones in two (or duple meters), in three (or triple meters) and four (or quadruple meters).

In musical notation these groups of beats are organized into measures (also known as bars) and separated by bar lines.

Now we can get to Time Signatures. As you’ve probably seen in sheet music, a time signature is a symbol that is made up of two numbers – one sitting on top of the other. Time signatures are used to indicate the meter quickly and clearly at the beginning of a piece of music.

In sheet music you’ll find the time signature at the beginning of the music. Here’s an example from a song by Schubert.

So in this Schubert song, the time signature is two-four:

So what do these numbers mean?

The bottom number tells us what those beats are worth. It shows us whether the beats are eighth notes, quarter notes, half notes, or another note value.

What about a four? The whole note divided into 4 gives us 4 quarter notes. So a time signature with 4 as the bottom number represents a quarter note pulse.

In the example above, the bottom number is a 4 so each beat is a quarter note. So the time signature two-four indicates that the meter is 2 quarter beats per measure. This is a duple meter, which means that it’s made of two recurring beats – the first beat is the strongest, the second being the weaker.

Here’s a composition in two-four meter. Listen carefully to the ‘one – two – one – two’ feel to it.

Let’s look at another example. This is the time signature three-eight:

Since the top number is a three, then we know that this meter consists of 3 beats per measure. It is a triple meter. Now we need to figure out what kind of beats they are. Since the bottom number is an eight, then they are eighth notes.

Three-eight is a triple meter of 3 eighth notes per measure.

Listen to example: Haydn – Allegro from Sonata no. 8

And what about the time signature two-two:

Here’s a piece of music in two-two meter. Just like two-four, listen to the ‘one – two – one – two’ effect.

Now try it out for yourself. Before we move on, define this time signature:

Before we move on, keep in mind that meters are made up of a fixed layout of strong and weak beats. However, don’t let the words ‘strong’ and ‘weak’ mislead you. They are terms that allow us to explain this particular aspect of rhythm. There is nothing inherently better with strong beats or worse with weak beats. They are both equally important. It is with these two together that meter works.

In duple meters, the first beat is the strongest while the second is weak. The example here is in two-four meter but the same applies to any duple meter such as two-eight or two-two. In the following diagrams, S stands for strong and w stands for weak. An uppercase W stands for weakest.

In triple meters, the first beat is the strong and it is followed by two weak beats.

In quadruple meters, the first and third beat are strong and the second and fourth are weak. The first beat, however, is stronger than the third so the four beats are: Strongest, weak, strong, weak.

It’s important to note that these strong and weak beats are not forced by musicians – they occur naturally within melodies, chord progressions, accompaniments and so on because music is naturally made up of patterns.

Also, the impression of strong and weak beats of a meter is often altered according to the flow of the music. A strong beat can be felt earlier or later than expected. In fact, this is a common way of giving the music a sense of variety. But it’s important to understand this theoretical outline of meters in order to understand any diversions from it.

Similarly, this is 3 eighth note beats per measure:

And this is 4 eighth note beats per measure:

The table below shows how the note values relate to different kinds of beats. The quickest way of calculating these relationships is to keep in mind which note value is assigned the value of 1. 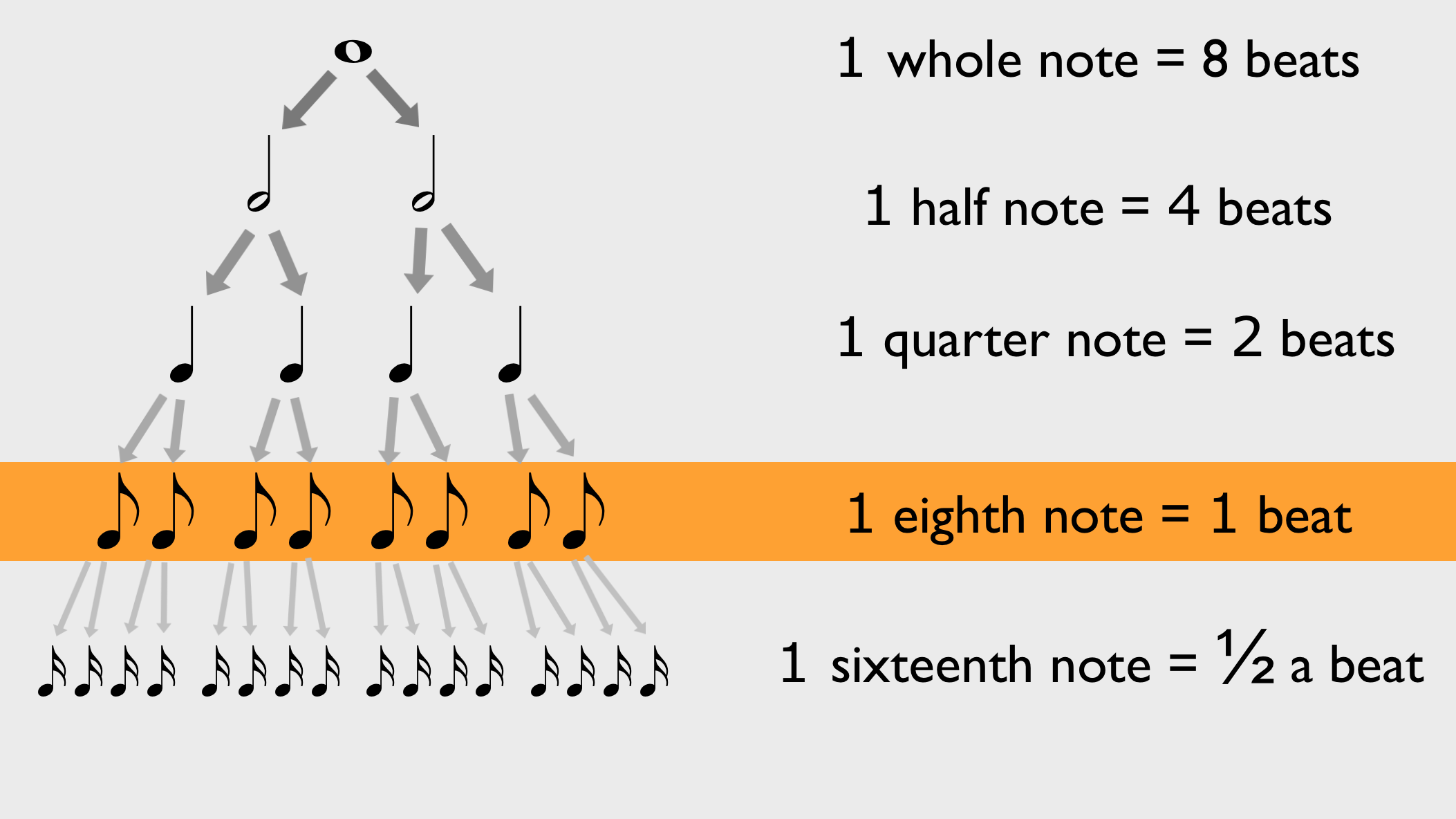 The Half Note Beat

Now let’s look at meters where the pulse consists of half note beats. In the time signature, half note beats are indicated with a number 2 at the bottom.

For example, this is three-two meter.

Similarly, 2 half note beats per measure:

And 4 half note beats per measure: 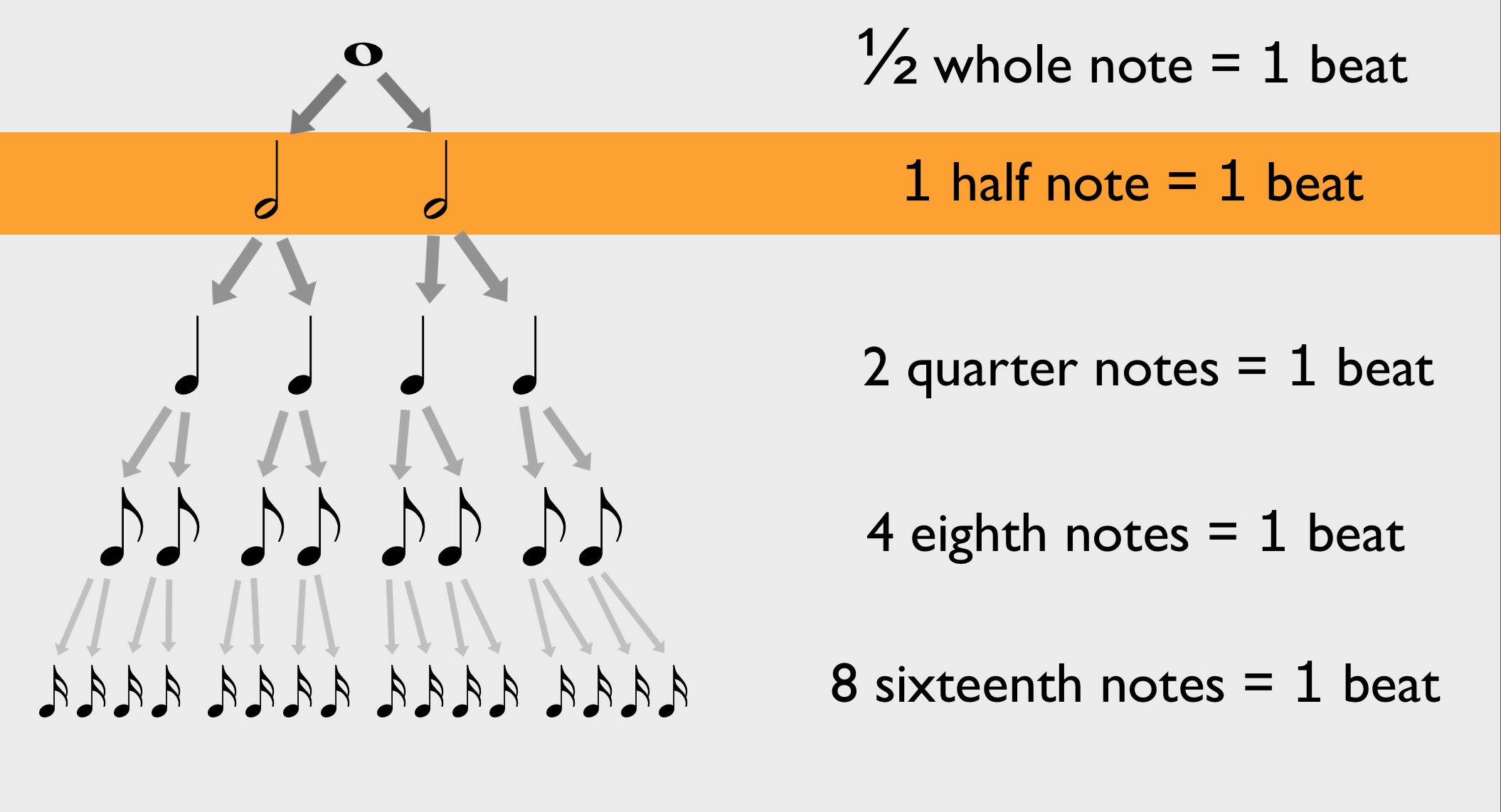 Apart from duple, triple and quadruple, we’ll also categorize meters as either simple or compound. 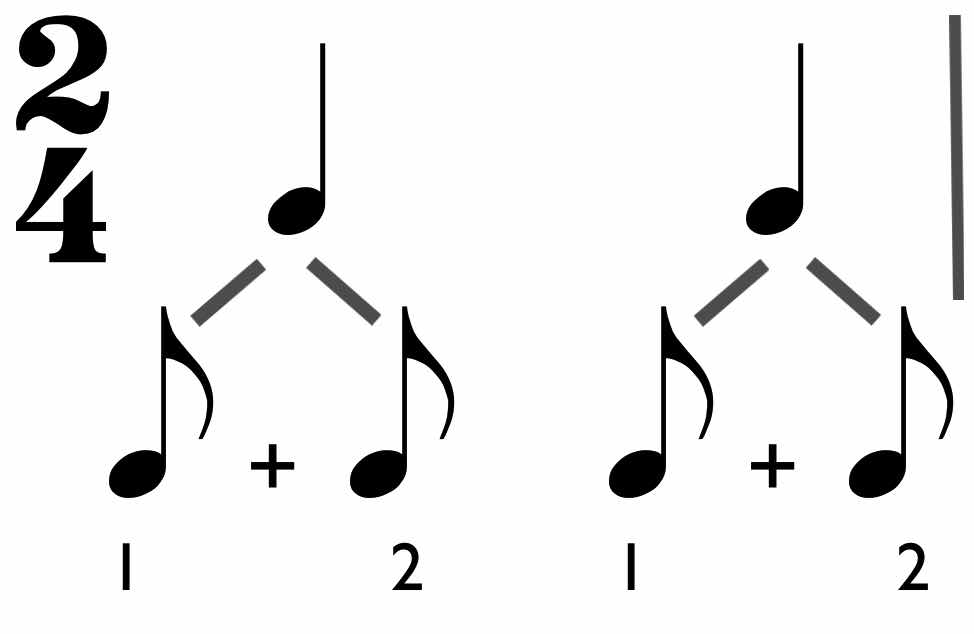 So the time signature two-four is a simple duple meter.

Another simple duple meter is two-two. It is duple because it is made up of 2 beats per measure and it is simple because each of those beats is naturally divisible by 2. 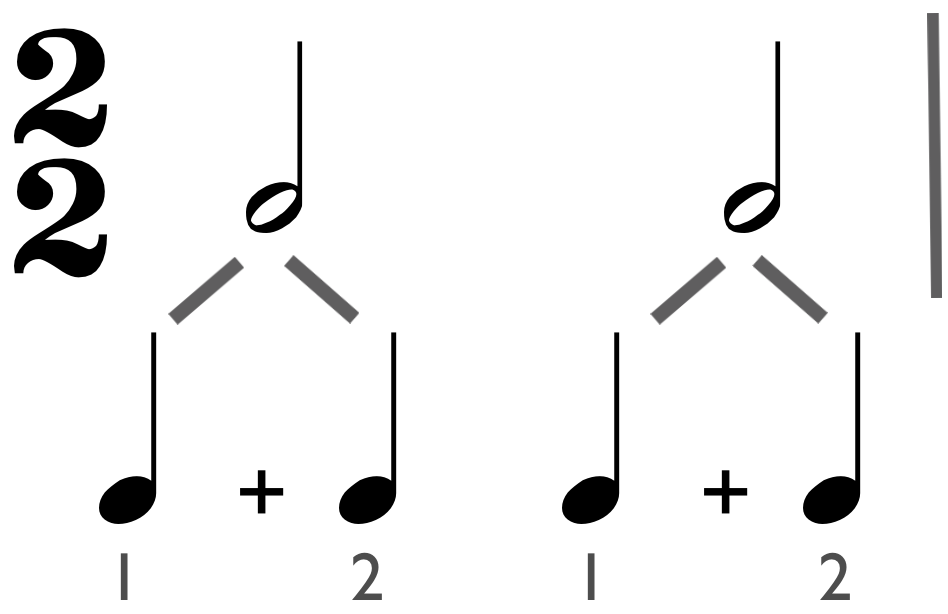 This is how it works: let’s take the simple duple meter two-four. As we’ve seen earlier, it’s made up of 2 quarter note pulses per measure and each of those is naturally divisible into two eighth notes.

But if the meter was made up of 2 dotted quarter notes instead:

Each of these 2 pulses are now naturally divisible into 3 equal parts:

In fact, the time signature for a meter made up of 2 dotted quarter notes is six-eight – 6 eighth note beats per measure. 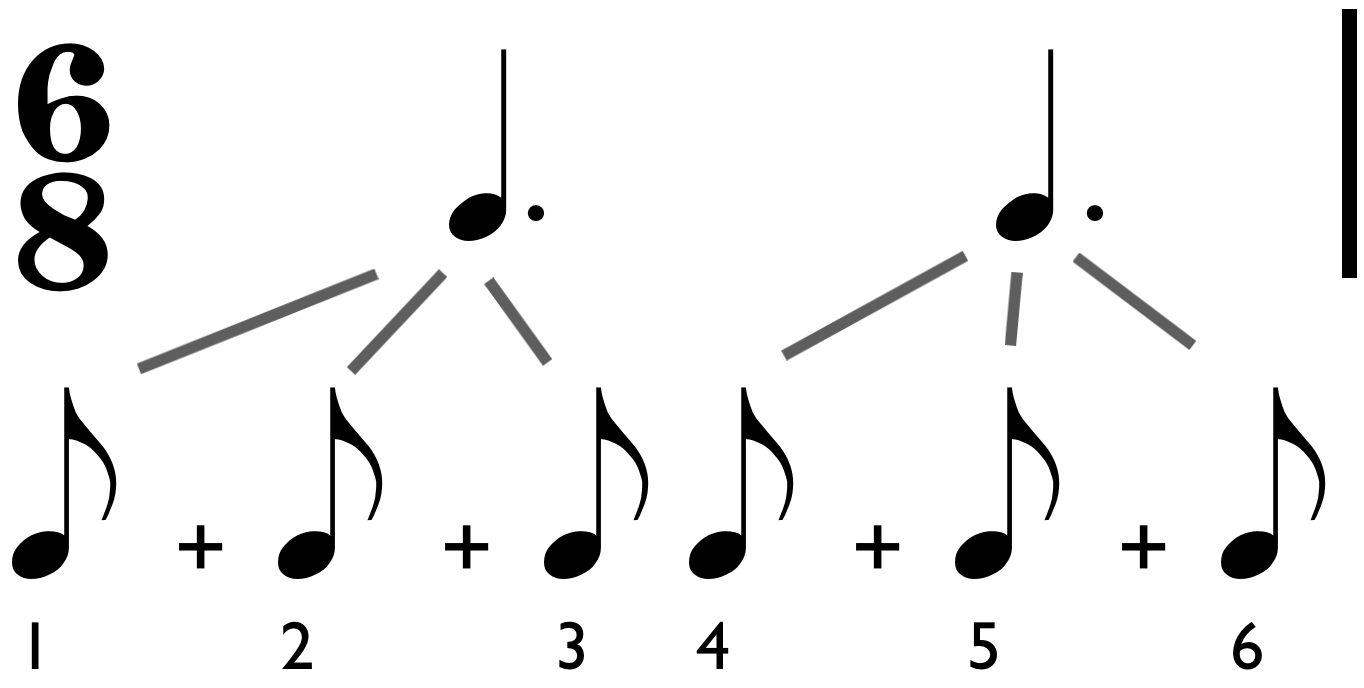 Keep in mind, however, that the main pulses are still the two dotted quarter notes (and out of which the first is the strongest). To distinguish between the main beats and their smaller parts, we can use the word ‘subdivision‘: 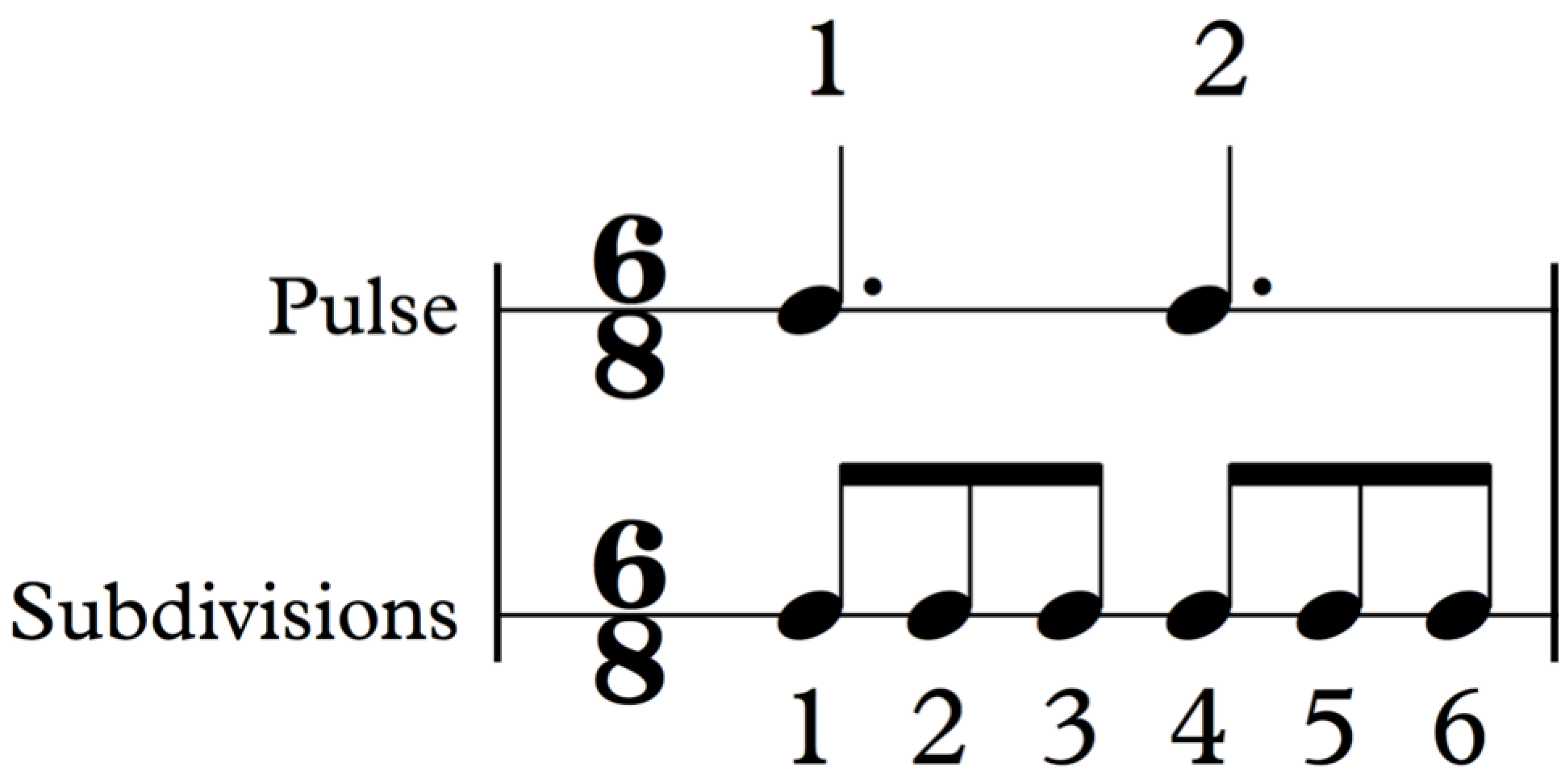 This means that this meter is duple. Since each of the 2 beats is naturally divisible by 3, it is compound. So the time signature six-eight is a Compound Duple Meter.

Let’s look at another example. This is a simple triple meter made up of 3 eighth notes per measure.

Adding those divisions up (the sixteenth notes) we learn that the time signature of this meter is nine-sixteen:

Finally, we’ll discuss an example of a compound quadruple meter. This measure is filled with 4 dotted half notes. What is the time signature?

Let’s get to the answer step by step. Every dotted half note can be broken down into 3 quarter notes:

The measure is now filled with 12 quarter notes. The top number of the time signature will therefore be 12. The bottom number must represent the quarter note subdivision and from our experience with simple meters we know that this is 4.

So the time signature of this compound quadruple meter is twelve-four. The pulse is in 4 and each one is divisible into 3 quarter notes:

So we learned that meters are defined in two ways:

So that’s all about time signature! Exercises are coming soon 🙂 I’d love to hear your comments or questions so post them below!