Welcome to the 2nd episode of “How I Write my Music”. The lesson where I take you behind the scenes to show you my thoughts behind the composition process.

This piece that we’re looking at today is my own entry to the February 2018 composition challenge. This is a monthly challenge that I set up here at SchoolofComposition.com and it’s open to absolutely anyone who’d like to participate. At the end of every challenge, I select a few interesting entries and discuss them on a separate video.

Before we begin with the analysis, have a quick listen to the piece: 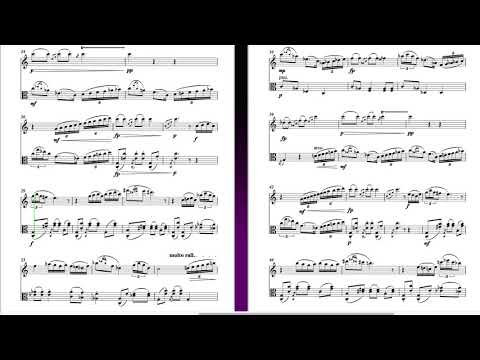 So let’s get started..

First of all, there’s an introduction. Nothing extraordinary here but it’s important because we get to know the tempo, the meter, the tonality and we’re immediately introduced to the sound of our instruments. At the same time, it sets up the harmonic blanket over which the flute melody comes in.

What gives this composition its particular character, its particular life (so to speak) are the form and the harmony so that’s what we’ll get into now:

The form is interesting because it’s a variation of the minuet. In fact, I considered calling the piece “A kind of Minuet” or some kind of “Waltz-minuet Hybrid” but I ended up choosing what I believe is the best-sounding title.

The form of the traditional minuet is ternary, which means that it has three sections. In short, they are:

But what’s unique about the Minuet is where specific repeats occur. In the traditional minuet Section A is repeated and then Sections B and A are repeated together. The repetition of A is often varied. A1 means that it’s A with variation/s. In other words:

For an example of this type of form, have a quick look at this Minuet in G major by Bach: BWV Anhang 116.

“An Unlikely Waltz” follows this scheme plus another repetition of Sections B and A. So the overall scheme then becomes:

A with repeats; B followed by the variation of A; B again and finishing off with another occurrence of section A.

Section A itself consists of 2 parts.

The first part of Section A is from bars 3 to 10 and it features the viola in the accompaniment role with the flute playing the melody. Notice that the melody itself consists of 3 fragments, each one longer than the one before. 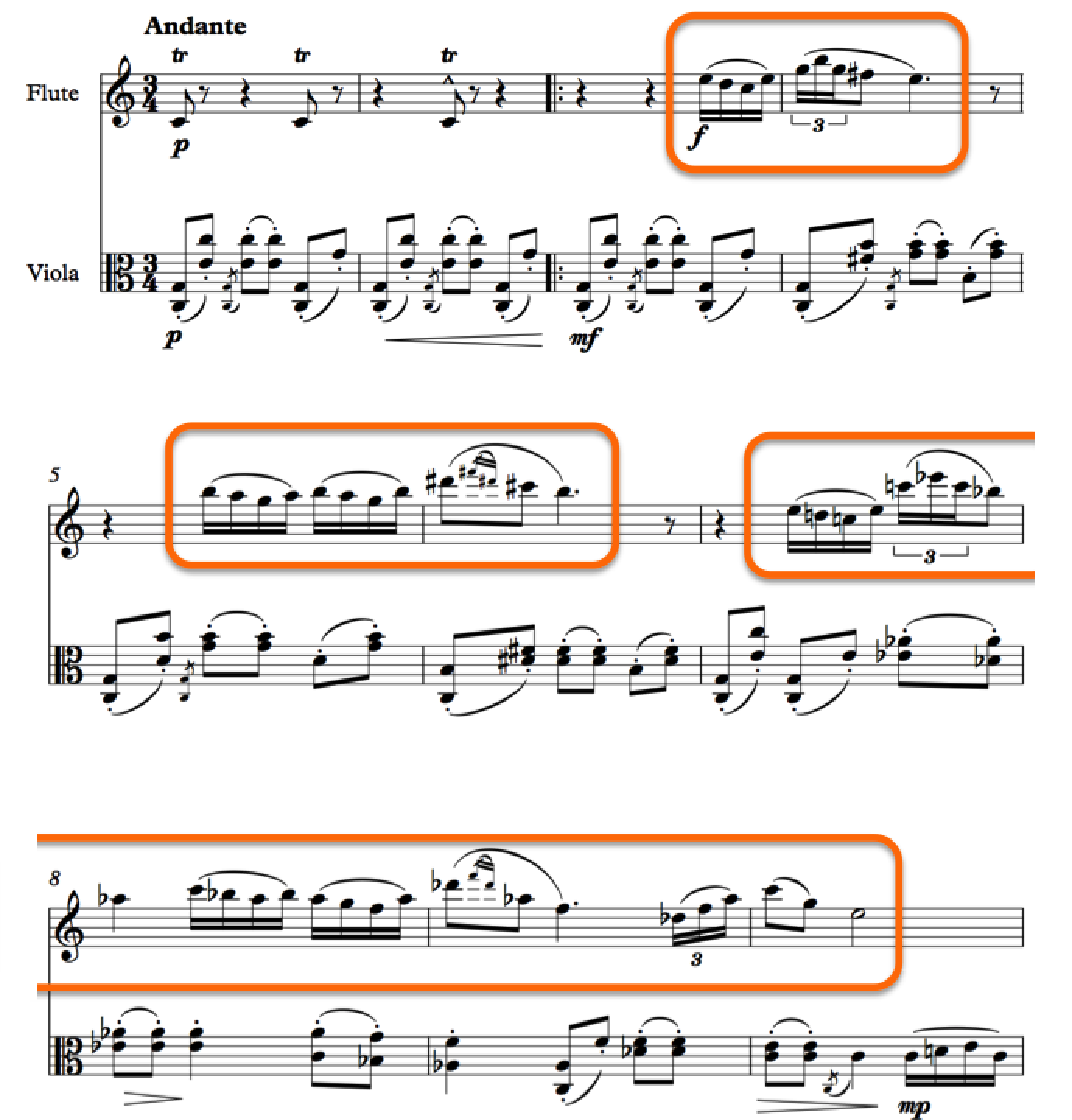 The second part of Section A is from bar 11 (plus the pickup/upbeat) and has the viola take the lead with the flute imitating in counterpoint. Notice also that the instruments come together to produce the ending: 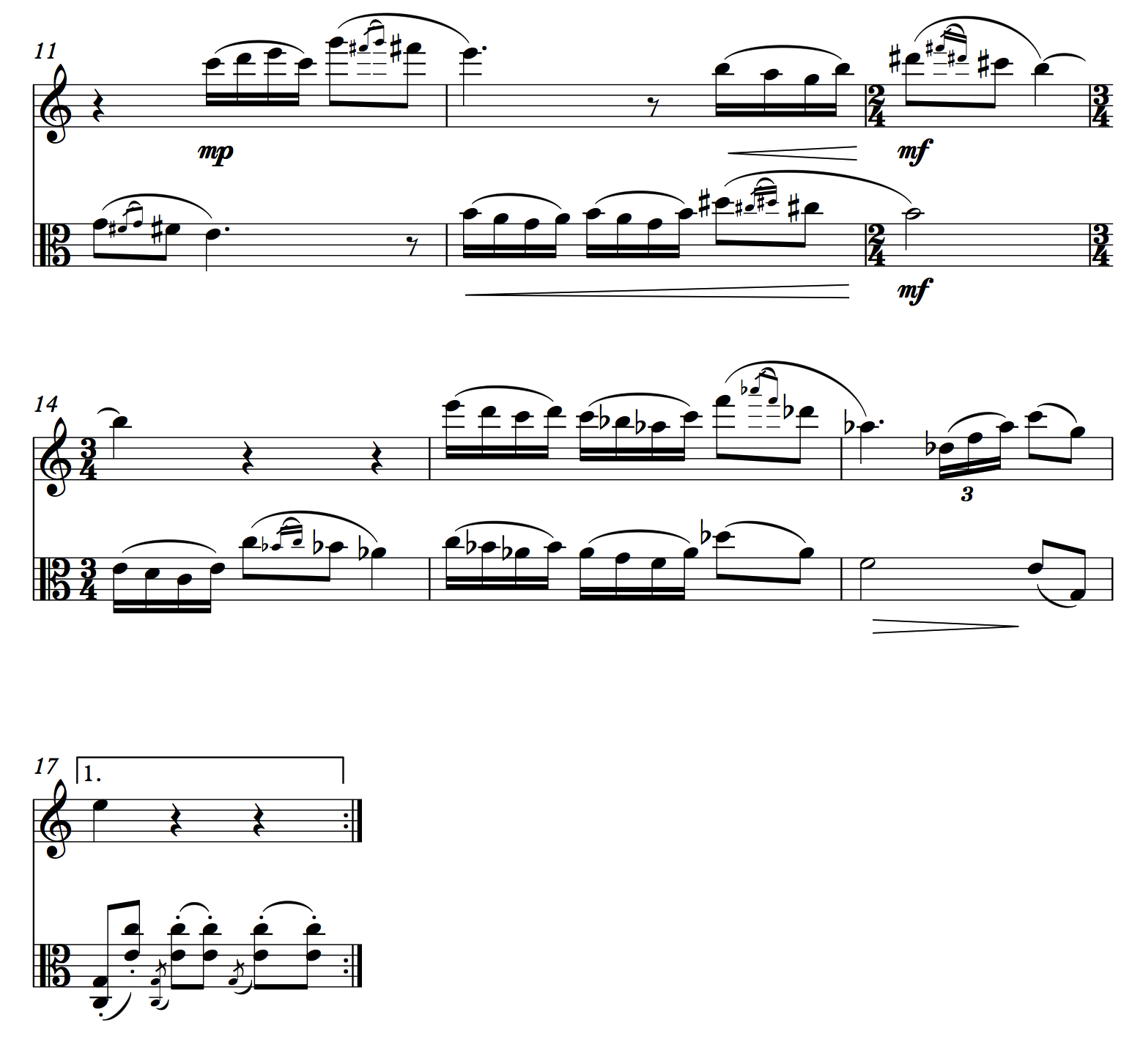 Section B itself also consists of 2 parts: the first from bar 18 to bar 24 and the second from bar 25 to bar 28. It’s really quite simple: there is a four-bar melody that is first played by the flute and then played by the viola.

What’s interesting is that they overlap: when the flute plays the last bar of the 4-bar melody, the viola begins with the first and so the transition is seamless:

Return to Section A

The return to Section A is where things get interesting, in my opinion. I could have simply copy-pasted section A as it first appeared. I did think about it but it didn’t feel right. We’ll get into the detail of this particular section at the end of this analysis.

Now let’s look at the chord progression behind the piece. If you remember, the stipulation for the challenge was that both instruments must begin together playing their lowest note.

I chose flute and viola specifically because of this requirement. The lowest note of the viola is the open C string and that of the flute (without any extensions) is the middle C:

And because of this, the harmony and the melody revolve around the note C.

The theme that appears in Section A consists of 2 parts – similar to the traditional question and answer but not exactly the same. The question is from bars 3 to 6 and its answer is from bars 7 to 10 – so it’s a melody of 8 bars split into 2 equal halves.

How did I get from C to B? And then from C to D flat? And why does this matter?

And these notes are used as the roots of the chord progression: 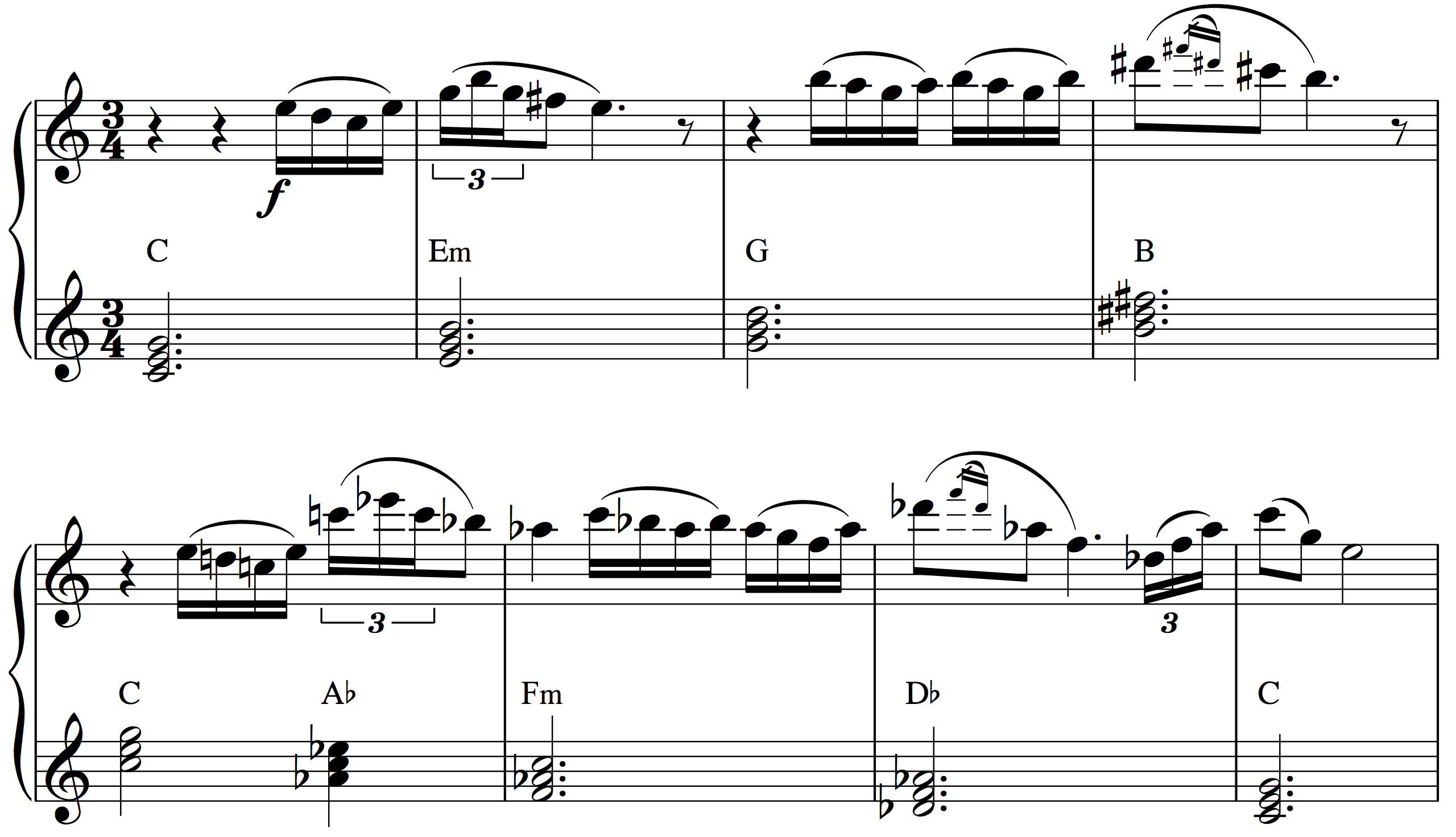 In the piece itself these chords are obviously arranged so that they’re playable by the viola.

So in a way, it’s like every new chord is treated as a tonic but the overall scheme still belongs to the key of C major.

The harmony and the melody of Section B revolve around the note C in a different way. In section A we started from C and moved up or down in thirds. In this section, the chords also move up or down in thirds but the note C is fixed. The note C starts of as the root, then it becomes the 3rd, then the 5th and then the 7th. The C is a common tone all throughout the progression:

As you can see, this means we get the same progression as the second half of the melody of Section A: C – A flat – F – D flat – except that the D flat now has a major 7th on top. 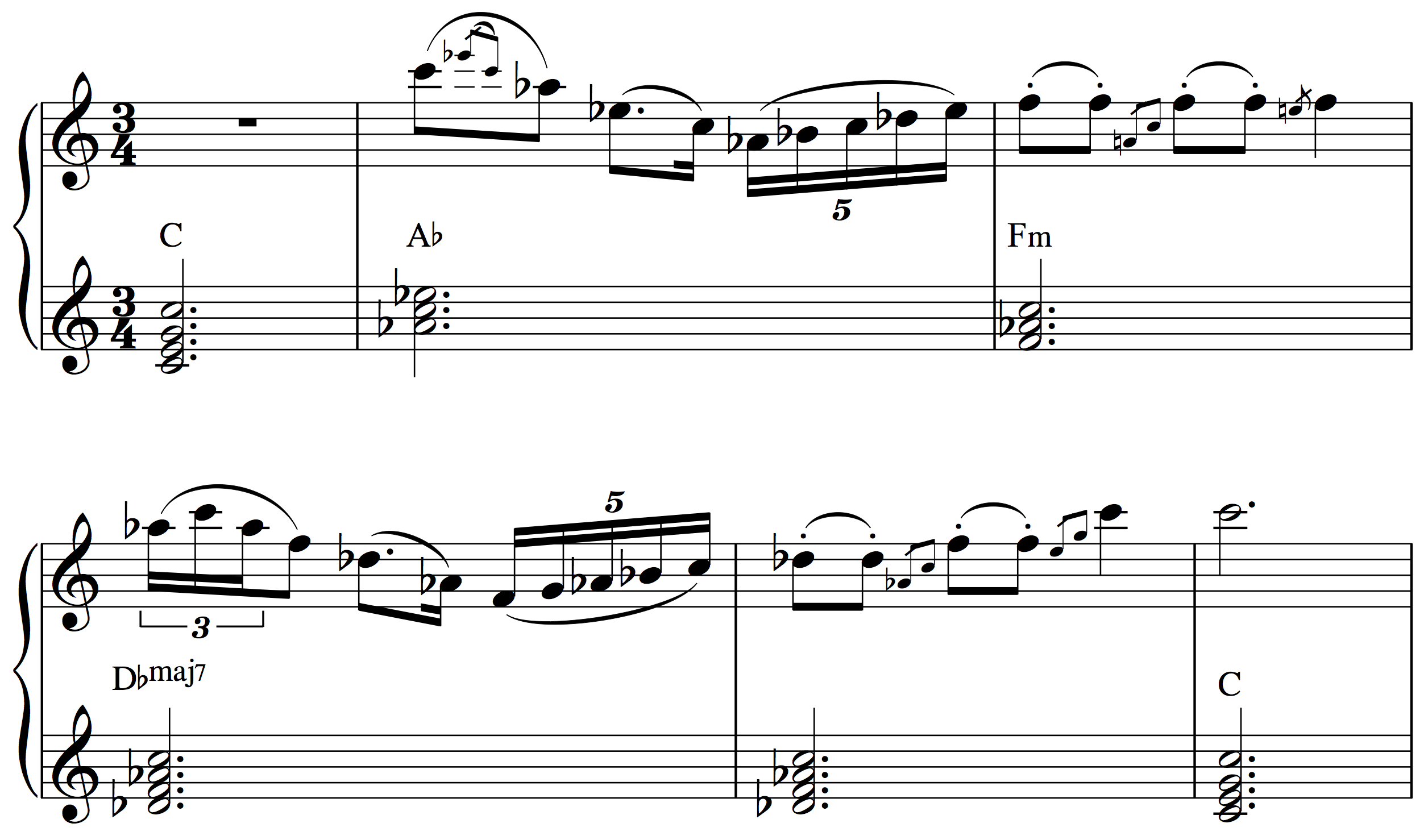 As I mentioned earlier, the return to section A consists of a variation of the theme. Instead of a copy-paste, we get some superficial variations.

I say ‘superficial’ because the changes are only on the surface: its structure, harmony and general melodic curve don’t change. And this is an important point: there’s no time in a short piece to introduce something entirely new at this point because that would have to be justified with further development, variations, contrast and so on. The piece would have to grow longer and longer to remain coherent. And so the variations are superficial – there is nothing in them that can be understood as something entirely new.

Compare note-by-note the original with the variation here: 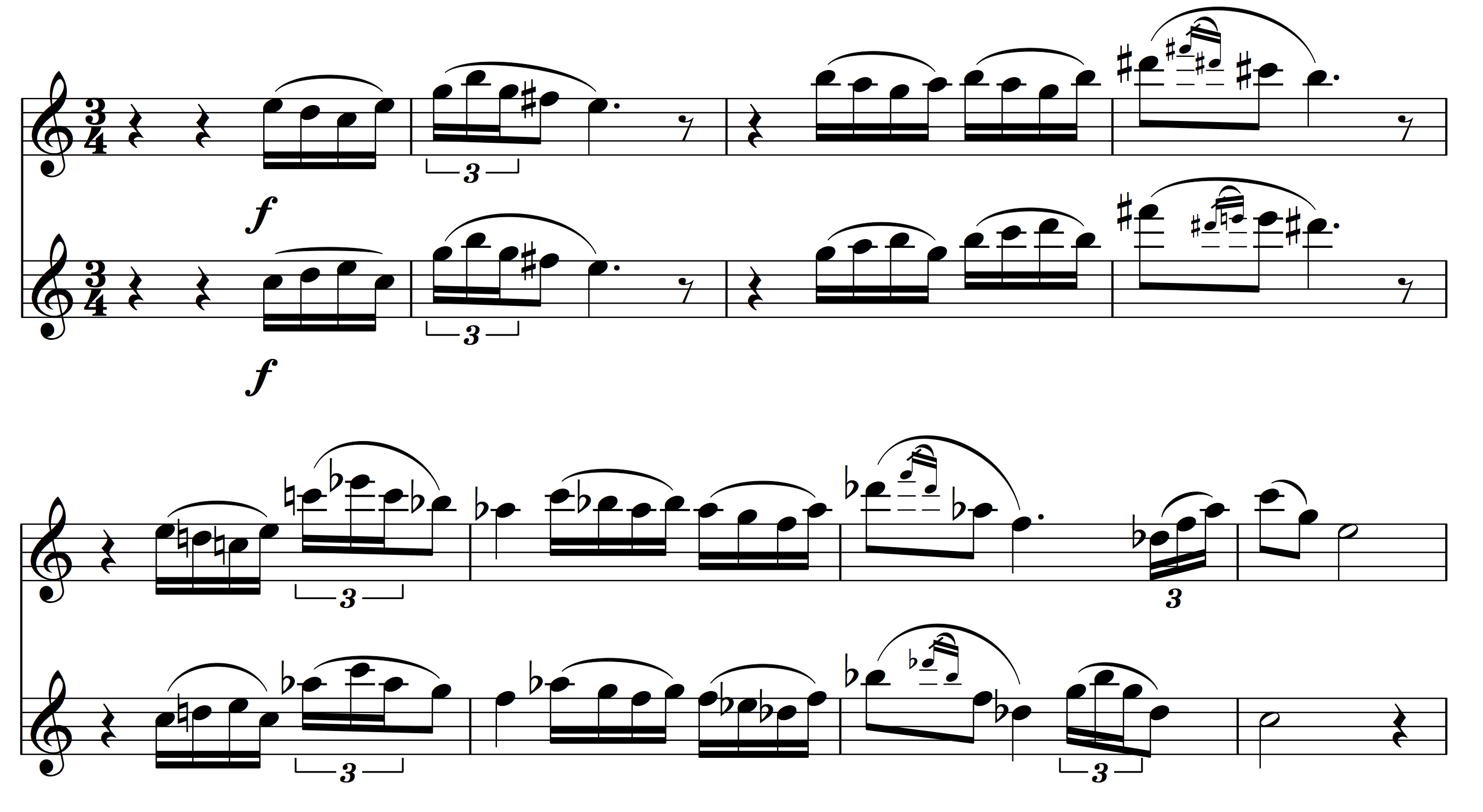 And that’s it for this piece! There are other things that we could go through but I want to keep it rather short and simple so if you have any questions or would like to discuss anything, leave a comment below or reach out to me at our Facebook group:

Thanks for reading and I hope you enjoyed it!
Matt E.